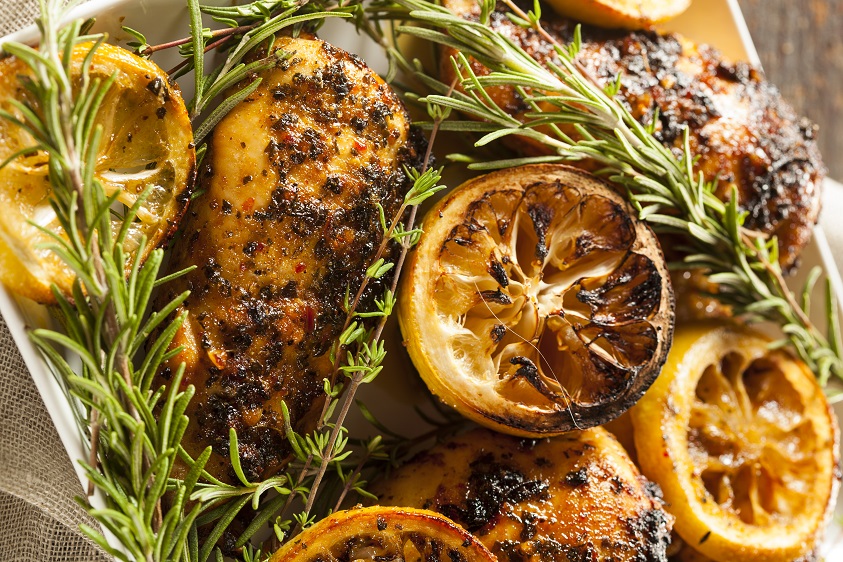 Keeping it simple with fresh herbs

When I cook a meal for Wayne, a self-described kitchen moron, it’s an expression of home and love. Wayne does his best to give those feelings of love back by taking food to the grill. It’s his kitchen in the backyard. He can be as messy as he wants and there’s little to break. If he screws up what he’s cooking, he can scrape it away and start over. Make no mistake though, the inside kitchen is mine and I rule that room of the house. Everything has its place and I like it to be just so. He’s not really allowed to be alone in my kitchen!

I don’t remember where we caught on to the rosemary chicken recipe. We cooked this quite a bit while living in Las Vegas so I am guessing we came across it then. I always worried about “borrowing” aka snipping, so much rosemary from our neighbor’s huge rosemary plants planted along side his driveway. Eventually, we shared with him that we would snip several twigs of the delightful herb several times a week to prepare this meal.

Lucky for us, we were all good friends and he didn’t mind. Wayne’s bus mates, and those close to us, have claimed it’s the best and most moist chicken they’ve ever eaten. If you make this recipe with salmon, you won’t need to cook it quite as long.

Preheat the grill to high. Prep chicken breasts or salmon filets (both with skin on) with a light spread of olive oil, sea salt, ground pepper, season to taste. Cut lengths of aluminum foil long enough to completely tent meat and rosemary.

Once the grill is good and hot, drop the temp to low and place the rosemary on one side. Again, you need to make a plate for how much chicken or fish you are preparing so the meat is resting on rosemary, not the grates of the grill. Slowly bring the burners under the rosemary up until it starts to smoke. If it’s flaming, back the heat down until you only see a bit of smoke.

Place chicken breasts bone side down (skin up) or salmon (skin down) directly on the smoking rosemary. Place aluminum foil tents over the entire array of rosemary and meat. Leave grill on low and let rosemary and foil smoke the meat—45-50 minutes for the chicken, 20-30 for the salmon filets. If you wish for a crispier finish, you can remove the tents for a couple of minutes and turn the grill up for that finishing touch.